The Art of The LP

Columbia was at the forefront in sleeve design. It’s not true that the 78 era lacked interesting sleeves, there were some beauties, but they tended to be “company sleeves” rather than related to the individual release.

In 1939, Columbia appointed Alex Steinweiss, then twenty-two as art director. Judging by his age and inexperience, they did not consider it an important role. He designed thewir often colourful and typographically interesting adverts.

Steinweiss had been struck by the crushing dullness of the records … the albums he was promoting tried their best to resemble the dustiest tomes in a library Boxed collections of three or four 78 records, these albums were usually dressed in tan brown covers with cod-leather binding, and ersatz gilt lettering if you were really lucky. From time to time an old master got pasted onto the front, but this was pretty rare. Steinweiss … put forward the then radical idea that more visually interesting packaging might sell more records.Travis Elborough, The Long Player … Goodbye, 2008. 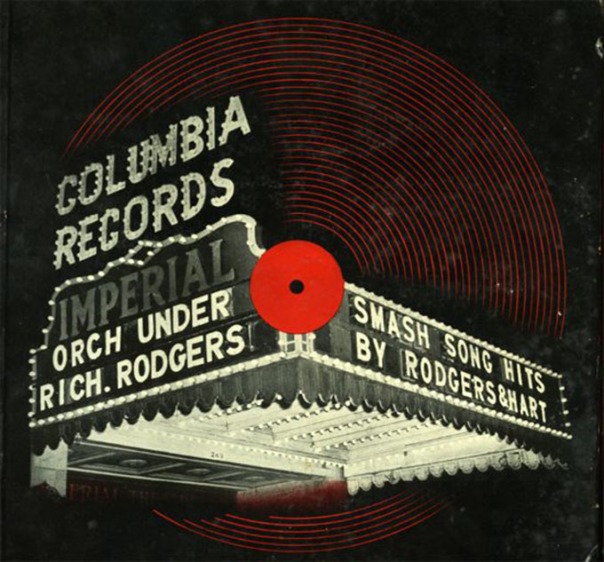 Steinweiss was vindicated when his first design Smash Song Hits by Rodgers and Hart was an instant success. They reissued a Beethoven 9th Symphony with a Steinweiss design, and sales rose by 894%.

Steinweiss left Columbia, but was re-hired in 1947 specifically to design the packaging for the new LPs.

For the LP, he devised what is known in the industry as the “wrap pack,” consisting of paper pasted on cardboard, which would remain the label’s design for its 331/3 releases until the appearance of compact disc. Steinweiss added his poster-like graphics and clever typography, and thereafter, the art department began hiring new crops of freelance graphic artists to illustrate the LPs. Later, in the 1950s, photographers would arrive on staff.
Sean Wiletz: ‘360 Sound: The Columbia Records Story.’

Many LPs and EPs stuck with generic labels until the mid-50s, though they did print the artist name, and had sleeve notes on the rear.

The Art of The LP: Sergeant Pepper

A Girl On The Sleeve

Original Sleeves: A Quick One by The Who

In progress – to be continued