It’s the bane of the collector’s life. Sticky labels defacing records that you can’t remove. Most secondhand stores put labels on, and it’s logical to whack the label on the sleeve if there’s a picture sleeve; but to label the centre if it’s not. Otherwise, that 99p Stateside Gene Pitney single could be so easily swapped for a £25 John Lee Hooker Stateside copy of Boom Boom. Ideally, dealers should label a plastic outer sleeve, and if they know their business will know the price of what should be in it. That’s harder with the cheap stuff. Dealers do have problems. You can’t simply shrink wrap secondhand records because no one will buy one without inspecting the disc inside.

The worst and stickiest offender is Record & Tape Exchange of Notting Hill (and elsewhere in London) whose labels are impossible to remove and reappear all over the country. Worse, when they put them on the centre label, they often go over onto the disc itself and over the play out groove. It takes ages to remove the gunge and if you don’t your stylus is going to hit a very sticky brick wall. On others, they’ve stuck them right over the A side title, so you have to deduce what it is from the B side. They also put them on new collectables like Soul City reissues, ruining the replica sleeves. The advice is that if you’re paying more than 50p for a record wherever, ask them to remove the sticker in the shop and if it rips the surface, decline to buy it. If it’s gunging up the groove, it’s straight in the bin.

Their predecessors in the area were nearly as bad “Exchange & Mart Fair” of Portobello Road. They put rubber stamps on the discs, as on the copy of the rare and collectable Brit. label single, Rum Pum above (see Island). What does it do to value? I’ve seen Rum Pum advertised as £20 to £30 in “excellent” condition, which this one is. With the stamp, I bought it at £5.99. I don’t mind it so much because it’s a vintage rubber stamp and probably dates from only a year or two later than the record. 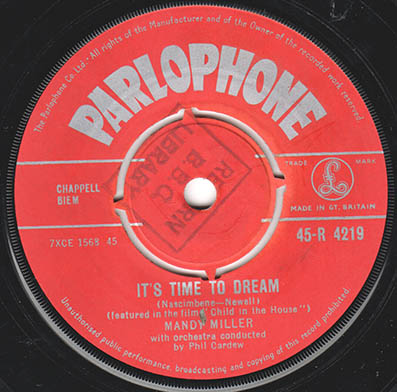 The stamp is on Mandy Miller’s It’s Time To Dream, a B-side. It isn’t clear enough to scan on the A-side. A shame, because the A-side is Nellie The Elephant, and the stamp says RETURN TO BBC LIBRARY, which means this may be a copy actually played on Children’s Favourites on the BBC Light Programme, That adds interest to the disc. It also shows they wore out a few copies, and that EMI kept repressing it for years, because the 1956 original would have had a purple centre label. This copy is somewhere between 1959 and 1962.

Most charity shop stickers are easy enough to remove if they’re recent, but harder if they’ve been there a year. Oxfam and several dealers use those annoying security ones that fall into pieces when you remove them (which is designed to prevent people swapping price stickers). I found some at Oxfam Sherborne where the stickers had been applied to both the sleeve and the disc … right across the grooves. They were also asking £4.99 for run of the mill 25p to 50p singles in the wrong sleeves.

Secondhand sellers aren’t the only culprit. Way back in 1965, Wells Music Stores of Romford found their own yellow sticker (announcing they were ‘alongside the police station’) more aesthetically pleasing than the HMV logo.

You will not get Our Price stickers off matt sleeves

Later, Our Price stickers peeled easily off CD jewel cases and laminated sleeves. Try getting them off a non-laminated sleeve or a single. That one’s on the M-People single forever unless you’d prefer a large white hole instead.

I’m Beggin’ / On The Wings of Love: Jeffrey Osborne, Property of Radio 215

Radio station singles are everywhere, dumped as they moved to CD, then hard disk. These are usually heavily defaced with reference numbers, radio station markers, and more interestingly sometimes added information such as “No. 37, 1981.” Most radio stations used card sleeves, but when they didn’t, they rendered company sleeves and picture sleeves worthless. 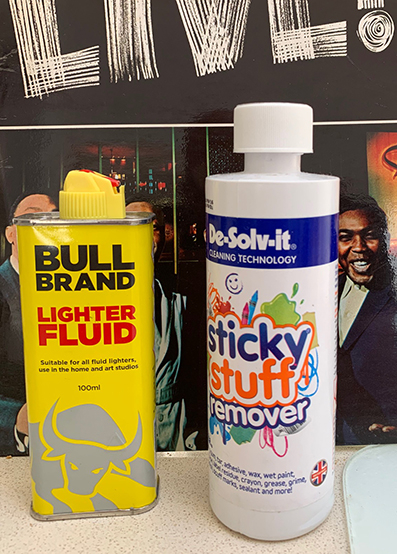 Secondhand book-dealer supply companies should be able to supply ‘Non-Sticky Sticky Stuff Remover’, and you need to scratch away at the glossy paper top layer, soak the next layer for five or ten minutes then apply a fingernail. It will leave a slightly greasy mark on matt surface, and you will see finger scratch marks on the paper. The result will never be mint. And you’ll have dirty fingernails.

Many shops use lighter fluid which is considerably cheaper though highly inflammable, and can be effective on stickers on glossy LP and EP sleeves and also on the slightly matt rectangle of gunge left when even an easy sticker peels off. It will leave an oily stain on matt paper.

Original Hit Version with bar code is part of the original product, so OK

There are exceptions to the undesirability of stickers. An original record company sticker from the time of release probably enhances desirability, as on Fourth & Broadway’s Street Freak by Syke Dyke: Original Hit Version! Accept No Substitute.

Some demo disks have stickers from record companies or pluggers attached, see the Judy Cheeks sleeve to Just Another Lie with “Ferrett ‘n’ Spanner Plugging Company” sticker.  An appropriate record title for a plugger, perhaps? You wouldn’t remove that. Nor Promotional Copy Not For Resale. 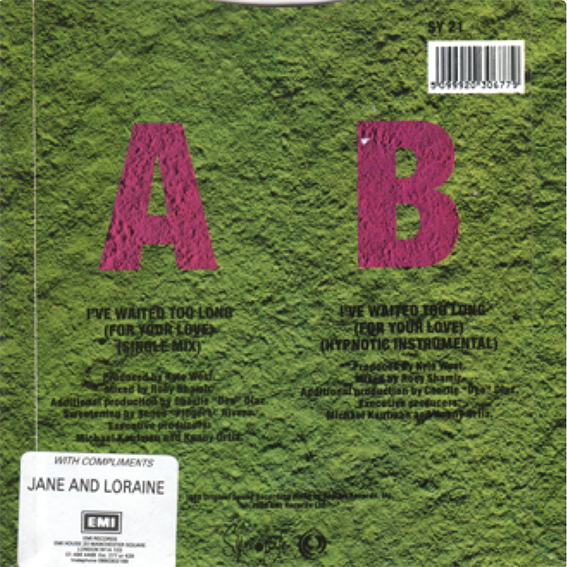 A nice little  promo dept. sticker with “Compliments of Julian & Cyril at Island” or “Jane & Loraine at EMI” might as well survive too. You notice that promo departments stick them neatly in a corner, not in the middle of an image or title.

Original pre-decimal price stickers should be left on, that’s the consensus, particularly on those 14/6d or 19/11d sampler LPs. People like them. 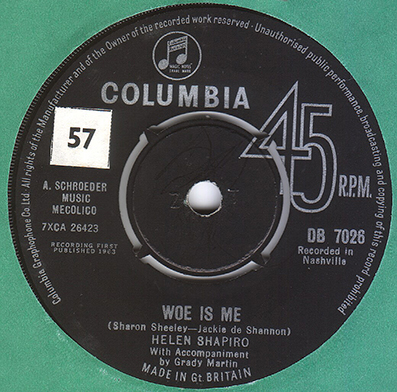 Sixties disc often have a small white number sticker attached. (See also Names, Scribble and Numbers). Wire record racks were sold which had numbered slots and a sheet of numbers that could be cut out, licked and stuck on the discs. These were made by Selecta for Woolworths, Metrak elsewhere.

Most commonly they were stuck on the disc rather than on the sleeve. The 7” racks had thirty slots but provided sixty numbers so you could continue on your second rack. When you look at the scans throughout the book, the indents of the wire rack at the bottom appears on many sleeves. These numbers are part of the era, and not worth removing.

A new one added in October 2021. A charity shop had put a strip of sellotape over the open end of LP sleeves. They’d done the same to CDS, but they were in jewel cases, three for £1 and I bought three. Sticky stuff remover does the job on jewel cases. But on LPs? And who wants to buy an LP without checking it? It was not worth telling the very elderly lady in the shop.