Going back, it wasn’t all about 10″ and 12″, even in the 78 rpm era. Records have ranged in size from five inches to a whopping twenty-one inches (that didn’t last long).

Woolworths produced seven inch  78 rpm singles from 1928 on its label  The Victory, bearing much the same logo as Ship matches. They were already previewing their Embassy label of the 50s and 60s by doing cover versions of hits, with different artists on each side. 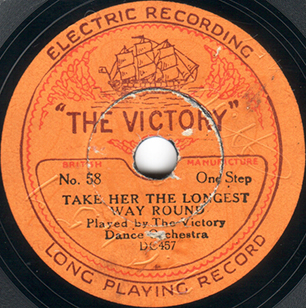 They even got Charles Penrose to cover his own 1925 hit, The Laughing Policeman, in 1928. They were manufactured by Imperial and retailed at 6/-d (2.5 p) when similar discs were 1/3d. (6p) Victory claimed to be long playing – to have the content of a 10″ disc on 7 inches, and they do have a tiny centre label, which may have helped. They were also in the anonymous artist / straight fee / no royalty game … “The Victory Dance Orchestra” covered a lot of performers.

In 1931, Woolworths introduced the Eclipse label, at eight inches, then expanded to a new series, Crown, at nine inches in 1934. They never got as far as a full (normal) ten inch 78 rpm budget label until early Embassy in the fifties.

Early on, various labels used an 8” size for shorter material, which was often popular or comedy. Various 78 rpm sites describe the 8” market as “lucrative” and “burgeoning” around 1930

Broadcast, an early Vocalion label, also came in with 8″ discs at 1/3d and boasted Playing Duration equal to a 10” Record (sic, capitalization of original). It’s slightly smaller than the Edison Bell disc, and the “Long Playing Record”  boast suggests either the grooves are closer together or the centre is smaller than a standard 10”. The Storm was originally recorded in 1926, this copy is undated.

If you look at the discs themselves, the centre label is so large that you assume they could have pressed it on 7” with a normal label. They were transferred from ancient 78s.

In the 1960s, 8” acetates were produced … though this included an extra inch of lead in track. 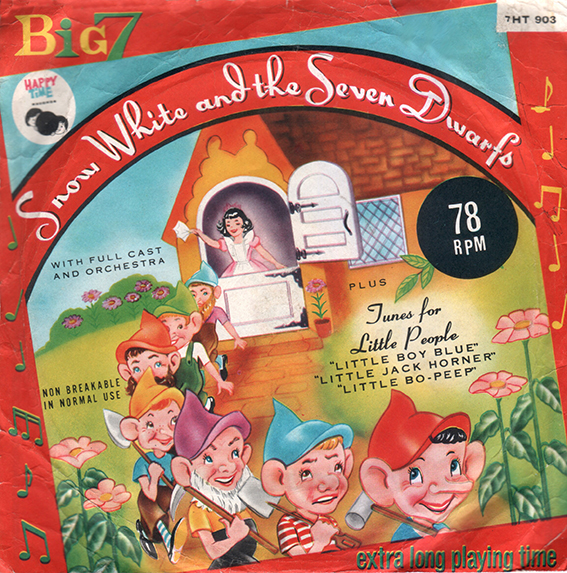 There were labels that deviated from the seven standard in the vinyl (rather than shellac) era, mainly kiddie labels. Some not only managed to use smaller discs but also keep 78 rpm going into the 1960s. Pickwick International used seven inch 78 rpm vinyl discs in their  Happy Time kiddie series in 1962, using a Big 7 logo, but then put them floating about in eight inch sleeves which wouldn’t fit record company racks. This may have been a ploy to ensure they were displayed in special racks, or to make them look as if there was more on them. The Mighty Tiny kid’s record player played two inch discs, but very few titles were produced.

Jack White (of White Stripes) revived the eight inch single in 2010 with fourteen limited edition  “Texas-sized” eight inch singles including Wanda Jackson’s version of Bob Dylan’s Thunder In The Mountain. They came in hand-made wooden box set too and were only sold at Third Man’s pop-up shop in Austin, Texas. 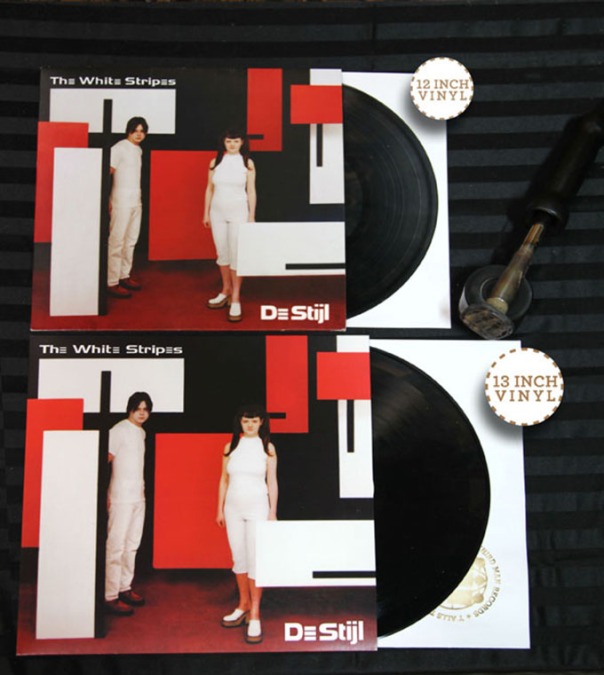