How much can you hear?

This is a technical bit. Sound is measured in frequencies. If you’ve ever had a hearing test, or seen someone having one, you put on headphones, and they play test tones ranging from deep bass to high treble and you push a button when you hear the tone.

Nowadays the tones are generated by computer. When my son had hearing tests thirty years ago (he needed grommets) the ear surgeon had expensive looking equipment designed to generate the tones. I was sceptical. You could buy a CD of test tones to check your hi-fi components with all the test tones on for £9.99. Less than a tenth the cost of the consultation. 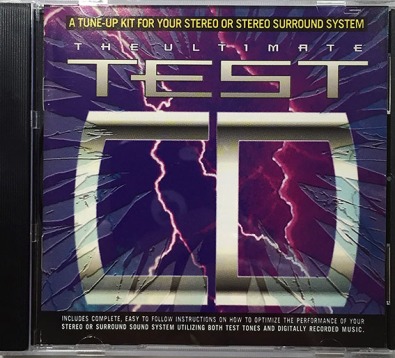 Another aspect was how well the headphones in use could reproduce every test tone. Unless they were extremely expensive, it’s pretty unlikely compared to studio monitor speakers. I saw a sign in the window of a hearing aid shop, ‘Train to give ear tests with us this weekend!’ It seems  simple to me.

You could buy LPs for years with the same purpose. These had test tones as well as checks on stereo (this is the left speaker … this is the right speaker), tests to see if the speed was accurate, and phasing, which is important but I never understood it. However if the phasing is wrong (positive and negative terminals reversed) it all sounds weaker. HI-fi magazines sometimes gave away CDs free. Back in 1977, Hi-Fi Weekly did a free 7″ 33 1/3 rpm test disc.

Test tones are used in the studio after a long mixing session. As the ear gets fatigued, it’s less sensitive in higher registers. They can run test tones, and if their perception has dropped below a certain level, they pack up and go home.

Hertz is the unit of frequency. Kilohertz is one thousand hertz. A human baby is said to hear sound between 20 Hz and 20,000 Hz (aka 20 KHz). I’m simplifying slightly, but 20 Hz is the lowest bass tone, 20,000 Hz the highest treble tone. The average adult can hear 20 Hz to 16,000 Hz, and with age that high end will consistently drop. Hearing loss is steady and progressive in the high registers. If you can’t hear above 8 KHz, you are hearing impaired, By age thirty, 16 KHz is your average range. At forty, 15 KHz. At over fifty, 12 KHz is likely to be the top on a test. And yes, I know YOU are exceptional and can hear better than those figures.

When CD was originally designed, it had a stop at either end. It can record down to 20 Hz and up as far as 20,000 Hz  (this frequency response) which they decided encompassed everything we could possibly hear. It did not record anything beyond those ‘stops.’ This is where the digital v vinyl debate gets esoteric, because an analogue wave has no shut off or stop points. The vinyl enthusiast will insist that though we cannot ‘hear’ beyond those limits we can perceive the difference. The argument works when you test a group of adults who on a previous test, which is using test tones, are limited at the upper end between 12,000 Hz and 16,000 Hz. Yet given several high-end pieces of equipment with music in a listening tests they still perceive the one which has the wider frequency range as sounding “better.” With music is important. It doesn’t work with test tones.

I’ll go further. We have a problem with urban muntjac deer destroying our flowers. We bought a deer scarer which is claimed to emit a 24,000 Hz (24 KHz) signal imperceptible to humans, but perceptible to foxes, mice, deer. Our under-five grandkids screamed and covered their ears when they got anywhere near it. My daughter in her thirties could hear it. OK, I doubt that the signal printed on the box is accurate, but kids can hear higher tones than adults. On average, women can hear higher tones than men.

Gender differentiation is a problematic area, and one nobody mentions if they can avoid it nowadays, but it is important in language teaching, so excuse me. If you’ve taught languages for decades, I don’t think you can argue with the statement that generally more women have a better ‘ear’ for languages than men. Tests on language acquisition indicate that women have more acute hearing and more women can sing in tune.  Both are facts. On the other hand, men in general are far better at placing the direction of a sound accurately (and if you really want trouble, you would suggest that it’s built-in and connected to child care by women, and hunting in a team by men.) I tested it personally this week. My wife noticed a fire alarm was squeaking for a new battery well before I did (the volume increases). However she didn’t know which of three it was. I did.

I just ran an online test tone on my Bowers & Wilkins MM1 computer speakers. It was two minutes of tones and I couldn’t hear ten seconds at either end. But is that my ears, or is it the speakers? They won’t go as low as 20 Hz (38) but will go higher than 20 KHz (to 22 KHz).

In the 70s there was a fad for the graphic equalizer, which had a row of sliders so you could boost a particular frequency area. What fun we had bringing up the bass guitar, or bringing up the trumpet solo.  Nowadays, the hi-fi purist will not even have an amplifier with tone controls. The producer of the piece of music made the decisions on how it should sound. Stick with it.

Other ways of playing with sound come in mid-priced car systems where you can switch from popular to classical to dance settings. Oddly, the one they skip is ‘spoken voice’ which would be most useful for audio books in cars.

Equalizers are built into programs like Garage Band which means you could do all the work yourself.

Hi-fi scientists were aware that some people can hear above that 20,000 Hz (or 20KHz) boundary, or perhaps have awareness of its superiority. Tests were done up to 40KHz. So later enhanced CD systems like SACD and DVD-Audio  go higher. The thing is, in the end everything comes out of speakers or headphones, which will have their own limits in frequency response.

Volume is connected to this. If you go to a hi-fi showroom, the salesperson will inevitably wind the volume up. It will sound way better- in terms of range, not just volume. The test is to set volume at what you would normally listen to at home.

All sorts of claims are made for frequency response … Apple list Earpods at 5 Hz to 21 KHz. The trouble is this. The best amplifier would have a flat response  that is it could handle all frequencies equally across the range. In real life, some frequencies will be reproduced more loudly and some more quietly. Yes, a device might be able to create every frequency but NOT with a flat response.

Here’s a chart. Remember that whatever the claim, it will not be a flat response unless it’s going into an incredibly expensive amplifier. Some of these figures are online, others I took from the drawer full of instruction manuals for specific equipment.